Now On Stage:
The Three Musketeers

Crafting Clue: A Costume Shop's Process on a Paramount Classic 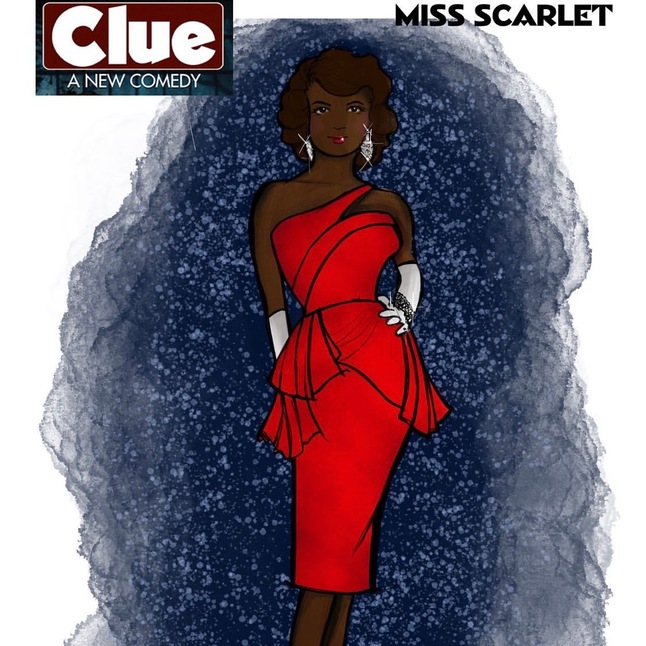 “We need to build everything.”

Cleveland Play House’s production of Clue, a stage adaptation of the classic Hasbro board game and Paramount Pictures film, hits the Allen Theatre stage starting January 25th and the CPH costume shop has been hard at work constructing every female character’s costume from scratch.

“There’s a possibility it may tour someday in the future,” Dickey said. “Normally, we can pull a lot from stock. In this case everything’s built.”

Since this stage adaptation by playwright Sandy Rustin is a new production, the CPH costume shop is taking all the necessary steps to prepare for the possibility of a tour.

Regardless of whether or not Clue ends up touring, there is lots of preparation for this fast-paced one-act show filled with weapons, eye-popping garments and murder on the menu. And the CPH costume shop is up for the challenge.

Was it the candlestick or the lead pipe?

The role of a costume shop in Clue is particularly unique because of the weapons used in the production. All the classic board game and movie weapons, like the revolver and the rope for example, are featured in CPH’s production of Clue. These weapons are made at the CPH production center by the properties department, but the second a character is struck with a weapon, it’s a costume.

“It will basically become a hat or a head piece” Sandra Zodnik, a costume crafter, said. Zodnik is the point-person for the costume shop with the properties shop and a lot of her projects answer the big questions like this one. There are several moments throughout Clue where props become costume pieces so the relationship between the costume shop and properties team needs to be strong.

At one point in the show, a character (who will now remain unnamed) is stabbed in the back with a knife and remains on stage for a short period of time. To ensure that the knife stays in their back, it’s all up to the costume craft team.

“We made little pockets that this (the knife) fits into” Clare Briggs, the Head Draper, said. There is a wedge that the costume shop built that will keep the knife tucked into the actor’s garment in the midst of a chaotic frenzy onstage.

Whenever the costume shop is tasked with a challenge like this one, it takes a team of creative minds to make it possible.

It all starts with the designer.

“Months before, there’s a design conference so all of the designers and director get together to talk about the concept and color palettes, time of year, when is it set, where is it set…” Dickey said. “Then there’s cooking all that together to make a cohesive picture and then we get the final renderings.”

Once the costume designer Jen Caprio sends the final renderings to the costume shop, Jeffrey Van Curtis, the Costume Shop Manager, begins to assign duties depending on people’s skill sets. In the CPH costume shop, there are shop managers, drapers, first hands, stitchers, and a wardrobe supervisor, each playing a certain role to prepare the show for opening night.

“We usually have about 3 weeks to put everything together so we just start with the mockups and all the costumes progress at the same pace” Briggs said.

Once an actor comes in for fittings, the shop creates mockups or rehearsal costumes for them to wear. These mockups are essential to the costume craft process because they give an actor a sense of how the costume will feel when they are performing for a live audience.

“Especially with Clue there’s a lot of physical action,” Briggs said. “A lot of them have to crawl or get over things so we want to make sure they can do all that stuff.”

Once the production hits previews for live audiences, the costume shop is still available to assist with costume malfunctions or issues. All that changes though starting January 31st.

How are the costumes in this stage production of Clue similar or different to the board game and blockbuster film?

While a lot of the secrets of Clue will not be revealed until audiences see the production, Dickey mentioned that there’s one distinct costume similarity.

“Silhouettes are going to be the same because it’s the same time period.”

And to counter that, this stage production of Clue will have somewhat different colors and fabric choices for the characters the costume shop has worked on.

Want to see a sneak peak of the designs for Clue? Click here to see a few renderings on the Cleveland Play House Facebook page.

The first preview of Clue for live audiences begins this Saturday, January 25th. To purchase tickets to Clue, visit clevelandplayhouse.com or call 216-241-6000.

Looks like a wonderful weekend to spend some time outdoors!😂☀️ #fbf to 2019's NATIVE GARDENS, the thought-provoking comedy that graced the CPH stage three years ago this month. Enjoy the pleasant weather this #LongWeekend! Photo featuring actor Wynn Harmon by @rog_mastroianni https://t.co/Bj64YWiMBX