by Duncan Macmillan with Jonny Donahoe
directed by Laura Kepley

If you were to make a list of things that make life worth living, what would be at the top? Ice cream? Family? The even numbered Star Trek films? Who would you share your list with? For our character in this uplifting solo performance, it’s their mother. This surprising and immersive theatrical experience speaks openly about depression, mental illness, and suicide. With poignant humor and joy, Every Brilliant Thing takes us on a journey through grief, healing, falling in love, and (re)discovering all that life has to give. 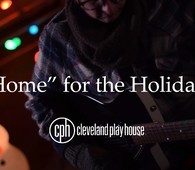 "HOME" FOR THE HOLIDAYS

CPH presents "HOME" FOR THE HOLIDAYS written by and featuring Christopher Gerson and Tarah Flanagan Facing their first ever holiday together at ho...