Teddy Bear Mountain is a story about two young children, Marcus and Maya, who are grieving the loss of their 12-year-old friend, Brandon. With the help of their grandmother, their neighbors, and a mysterious woman, the siblings learn how remembering can help them heal the pain of loss.

Join us for a World Premiere and the first production in CPH's Family Theatre Program! This production is perfect for families and children ages 5+.

All performances are FREE of charge.

No reservation is required! Come as you are!

This production contains open, but gentle conversations about death and loss.

Performances runs approximately 60 minutes without an intermission, and will include an optional Q&A after the performance. 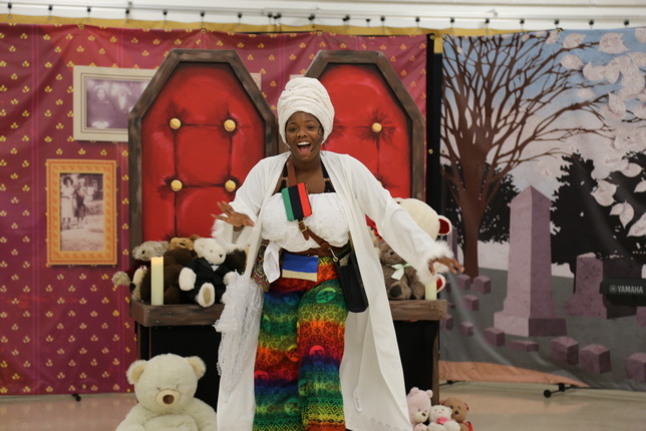 Alexis Maxine as The Woman. Photo by Nathan Henry. 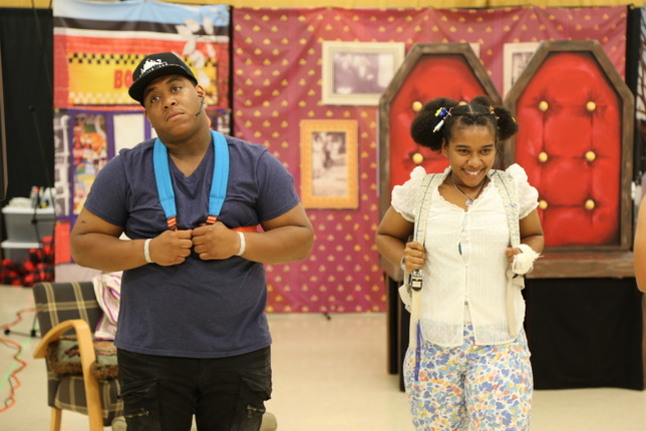 Dar'Jon Bentley as Marcus and Jasmine Renee as Maya. Photo by Nathan Henry. The Company of Teddy Bear Mountain.

Support for Teddy Bear Mountain is generously provided by the US Department of Education.

KeyBank is the presenting sponsor for the 2022-2023 season at Cleveland Play House.

DAR’JON BENTLEY (Marcus) is a Cleveland native and has appeared in several theatrical and film productions around the Cleveland and Pittsburg area. He has been seen in American Rust on Showtime, as “Oso the Brindle Pitbull” at Cleveland Public Theatre, and in other roles such as Chuck DM Biggs, Pontius Pilate, Dorante, and Eddie Carbone at Baldwin Wallace University. When he is not on stage, you can find him behind the camera with his film company, Bleak Forest Productions. Dar’Jon is a CPH CARE Teaching Artist within the Cleveland Metropolitan School District. Upcoming projects include the world premiere production of the new musical Land of Oz at Dobama Theatre. @iamdarjonbentley

CARLOS ANTONIO CRUZ (Mr. Martinez/Mr. Trashman) is overjoyed to be in his first CPH production. He has been a performing and teaching artist in the Northeast Ohio theatre community for over 20 years. He recently appeared in Near West Theatre’s inaugural Black Box Theatre production of The Fantasticks as El Gallo. Other credits include The Web of Anansi (Anansi) at Near West Theatre, Passing Strange (Mr. Franklin/Joop/Mr. Venus) at Karamu House, and City of Angels (Pancho Vargas/Muñoz) at The Beck Center for the Arts. He dedicates this performance to his beloved Puerto Rico and thanks the Divine for the Gift of performance. “ARRIBA BORICUA!”

ALEXIS MAXINE (The Woman) is grateful to be joining Cleveland Play House for the first time. She has been very busy this season having performed in The Color Purple (Nettie), Spongebob The Musical (Sandy), and Rent (Joanne). Alexis graduated from Notre Dame College with a Bachelor of Arts with a focus in Theatre Entrepreneurship. She has worked with Mercury Theater Company, Cleveland Public Theater, and Playhouse Square. “With peace, love, and harmony! Take wings and fly!”

SHANNON SHARKEY (Nana) is excited to be back at CPH where she was a member of the 2017 CPH Professional Apprenticeship Class. A Cleveland native, Shannon is a theatre, film, commercial, and voice actor, as well as a diversity and equity educator. She holds Bachelor degrees in both theatre and communications from Cleveland State University and has been blessed to act/work for many of Cleveland’s major theatres including Cleveland Play House, Karamu House, and Cleveland Public Theatre. Shannon also worked as an actor/educator in Idaho and Northern Nevada for Idaho Shakespeare Festival. She has been seem most recently in Cleveland Public Theatre’s Panther Women: An Army for the Liberation (NNPN Rolling World Premiere), where she was humbled to play the incomparable Angela Davis.

SEPTEMBER STANTON (Swing) appeared as Juliet in the Rubber City Theater production of Romeo and Juliet. She was a lead in the short film, In My Mind, written and directed by Nara Cruz, which was featured at Cobb International Film Fest in Marietta, Georgia. September graduated from Blackburn College with a Bachelor’s degree in Theater and a minor in Political Science. She has also trained at The Houde School of Acting with a focus in Meisner and Improvisation as well as The Royal Birmingham Conservatoire in London, England, where she received a Master of Fine Arts in Acting. She is excited to be a part of this gifted ensemble and loves that Teddy Bear Mountain is giving insight into how we deal with pain in order to learn and grow from it.

LISA LANGFORD (Playwright) is a Cleveland-based playwright and actor and is a member of Dobama Theatre’s Playwrights Gym. She received her B.A. in History from Harvard University and her M.F.A. in playwriting from Cleveland State University. Her play Rastus and Hattie was a 2019 Joyce Award winner (Cleveland Public Theatre); a 2019 Eugene O’Neill Theater Center National Playwrights Conference finalist; and a The Kilroy’s List honorable mention. After productions at Cleveland Public Theatre and 16th Street Theatre in Chicago, the play will be published by New Stage Press. Lisa’s other plays include How Blood Go, which was an August Wilson New Play Initiative reading series selection at Chicago’s Congo Square Theatre and excerpted in a reading at Global Black Voices at the Roundhouse Theatre in London UK; The Art of Longing, a Leslie Scalapino Award finalist for Innovative Women Playwrights; and two short plays, The Bomb, published in the anthology Black Lives/Black Words, and Revolt. Ing, which was part of the Goodman Theatre’s I Am…Festival in Chicago. A recipient of the Ohio Arts Council Individual Excellence Award, Lisa is a member of the Dramatist Guild and Zeta Phi Beta Sorority, Inc.

LEEANÉT NOBLE (Director) is an internationally critically-acclaimed creator. She graduated Magna Cum Laude from Howard University with her BFA in Theatre. Her NYC theatre credits include STOMP, Drumstruck, two original one woman shows KickN2theBeat (Off-Broadway) and In My Shoes (54Below), among others. She has worked with and/or opened for Rihanna, Lauryn Hill, Alicia Keys, and Bono. She worked with Disney on Broadway for nine years and is featured in their series, Disney’s The Lion King Experience. As a director, writer, and producer her virtual production Shakespeare Everywhere, produced by STC, featured Angela Bassett, Judi Dench, and more. Other directing credits include: Goddess: The Women of Gods; Our Town Our Shakespeare; 10Seconds; Death and The Kings Horseman; and Team Vicious (Kennedy Center). She currently teaches a Black Theatre history course for the ACA at George Washington University, and is on senior staff and the artistic team at Shakespeare Theatre Company.

LAURETTA MALLOY NOBLE (Music Director/Composer) is a critically-acclaimed performer, vocalist, musician, and composer who worked with many recording artists including Webster Lewis, Earth Wind and Fire, Queen Latifah, Lauryn Hill, and Quincy Jones, among others. She trained with her mother – vocalist, pianist, published author, and recording artist Dr. Loncie Malloy (National Symphony Orchestra). As a musician she studied under Max Roach, Dizzy Gillespie, and Grady Tate (Ella Fitzgerald.) She was a first soprano in the world-renowned Morgan State Concert Choir, studied Music Therapy at Howard University, and is certified in filmmaking by The National Film and Television School. She performed as a soloist for the Martin Luther King special at The Kennedy Center, backed by The National Choral Arts Society. Lauretta created therapeutic arts programs for Montgomery County Government, Knowledge is Power Program, Brooklyn Academy of Music, and Maryland School for the Blind. She is also a visual artist who illustrates children’s books.

NICK "tha 1da" HERNANDEZ (Sound Designer) is a sample-based producer, DJ, and teaching artist. He has produced and designed compositions for: Luchadora! at Adventure Theater; Long Way Down and Darius & Twig at The Kennedy Center; The Hip-Hop Children's Trilogy with playwright Psalmayene 24 at Imagination Stage; Fences at Ford's Theatre; Word Becomes Flesh (Helen Hayes Award, Outstanding Production) at Theater Alliance; and Havana Hop and All The Way Live! at Discovery Theater with his sibling Paige Hernandez. Additionally, Nick has produced compositions and projects for Hot 97 FM, Red Bull Music, Netflix, DC Public Library, The Smithsonian, and The Kennedy Center. @nicktha1da

CHEYENNE MOORE (Costume Designer) is pleased to be working with Cleveland Play House once again where she previously worked as a dresser and stitcher for Light It Up! in 2021. She hails from Cincinnati and resides in Cleveland and has worked with several theaters including Oberlin Summer Theatre Festival (Measure for Measure, Butterflies are Free, and A Long Days Journey Into Night), Kent State Center for the Performing Arts (The Mystery of Edwin Drood), Great Lakes Theater (Much Ado About Nothing and The 39 Steps), and Idaho Shakespeare Festival (Romeo and Juliet). She has also worked with amusement parks Cedar Point and Walt Disney World and is a proud alumna of the Kent State University Fashion School. @c.mooresewing

GARY GALBREATH (Keyboardist) was born and raised in Cleveland, Ohio. As a child, sports and music was a major factor of his life. He started to play the piano at the age of 5 and took off. He graduated from the iconic Cleveland School of the Arts in 2010 with vocal music and piano as his discipline. Gary obtained a bachelor’s degree in telecommunications from Bowling Green State University in 2015, with a concentration in media business where he served as a sports anchor for the campus organization, BG24 News and played Club Baseball. Mr. Galbreath is currently a piano instructor that leads youth through piano lessons, where students learn self-discipline, how to read music, and perform songs. Gary’s primary focus is to use music as a way to engage students to improve academically, socially and prepare them for future endeavors as they move fluidly through life’s challenges. In February of 2021, Gary Galbreath won the Future History Maker award with the city of Cleveland radio station contest. Also, Mr. Galbreath was featured by his Alma Mater, Bowling Green State University for exemplifying great work in the city of Cleveland.

JAYLEN GRAVES (Percussionist) was born and raised in Cleveland and has performed in several cities throughout Ohio, as well as Indiana, New York, and Georgia. Jaylen is a 2018 graduate of The Cleveland School of the Arts with a major in band. He developed a love for playing the drums at the age of 7, when he was chosen to perform as The Little Drummer Boy in a church play. Since then he has played percussion for his church, as well as his family’s choir. He has also attended several intensive music training camps at Baldwin Wallace Conservatory of Music. 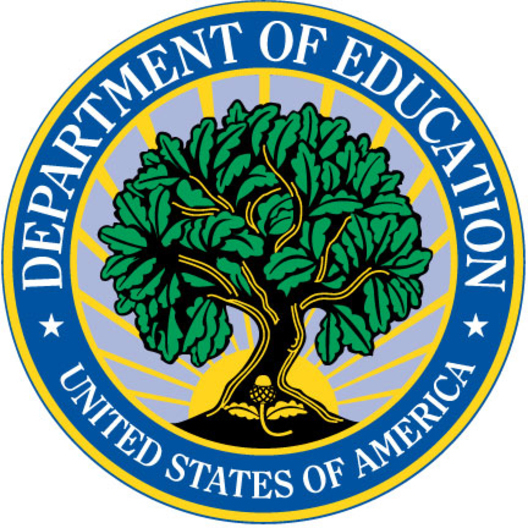 This program is provided under a contract with the John F. Kennedy Center for the Permorming Arts.