How I Learned to Drive

Buckle up. It’s going to be a bumpy ride. Li’l Bit takes us on a no-holds-barred trip back in time to her adolescence in 1960s Maryland and her complicated relationship with an older man. A deeply compassionate look at how we are shaped by the people who hurt us, How I Learned to Drive masterfully veers in and out of personal memory and deftly traverses comedy, drama, and farce. CPH Artistic Director Laura Kepley steers Paula Vogel’s Pulitzer Prize-winning contemporary masterpiece. 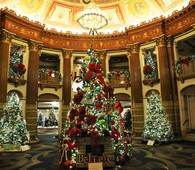 CPH Festival of Trees is a Fundraising Success