Up Next:
Crooked River Burning

Up Next:
Lake Erie Oubliette 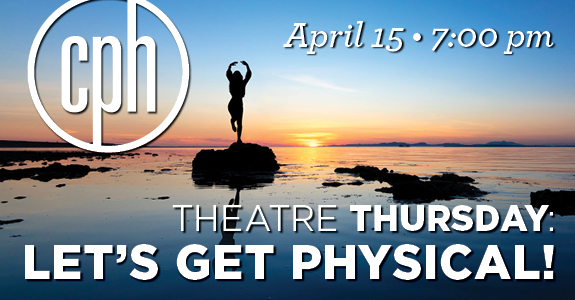 April’s Theatre Thursday: Let's Get Physical!, will be an evening of stories about living inside the wonderful, unique and sometimes surprising shell that we call a “body.” Featuring three comedic pieces, it’ll be a celebration of body positivity and a thoughtful—and funny!—exploration of body image, self-esteem, and more. Featuring work Ken Kaissar, C. Julian Jiménez and Kate Huffman

"The focus for April Theatre Thursday is on our bodies. Being stuck inside and working all day on the computer, it’s easy to forget that you have a body. When we do think of our bodies, we sometimes go into a depression spiral because we think we are not fit enough, young enough, or look the way society tells us that we should. The plays in April Theatre Thursday inspire us to listen to our bodies instead of the outside world and to celebrate the remarkable bodies we have." - Laura Kepley, CPH Artistic Director

"While it's easy to allow external voices and internal doubts to control how we feel about and engage with our bodies, we are the experts of our own bodies. The three pieces featured in CPH's April Theatre Thursday give us a chance to think deeply about what it means to take care of the bodies we've been given, while celebrating all they can do." - Mekala Sridhar, CPH Artistic Associate

Theatre Thursday is a monthly interactive virtual events which will allow audiences to experience the artistry of CPH, connect directly with the makers of our work, and converse with staff and other audience members about the impact of our artistic work in our beloved community.

Theatre Thursday is for CPH fans and anyone interested in learning more about the work of America’s first regional theatre -- onstage, backstage, in the classroom and in the community.